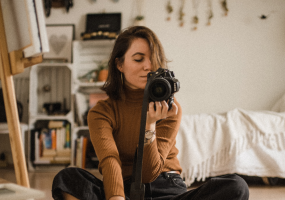 Don’t forget to consider using local influencers as you think about your digital marketing strategy. This can be a handy and cost-effective way to promote your company. Additionally, even small businesses likely have the budget to work with local influencers. You have to know which influencers to focus on.

First, what are local influencers? They are localized and sometimes called nano influencers because their audiences tend to be much smaller. Expect an audience of about 1,000 to 10,000 people.

While this may seem like a small number, local influencers have the advantage of being focused in your area. This means that nearly every one of those followers is in your community. This is especially important for small businesses that want to attract local customers.

Their smaller audience size also means that local influencers are much more affordable than larger audiences. So, you get to stick to your budget while taking advantage of an audience that is much more likely to be close to your store.

When you use local influencers, you get the same benefits as an influencer with a broader audience. The difference is that they are affordable, and a higher proportion of their audience lives nearby.

Remember that with any influencer marketing, the influencer becomes your spokesperson. Think of them as brand ambassador who refers your company to a broad audience.

People looking for recommendations are likely to turn to influencers, especially if the influencer in question has built a strong reputation for providing useful advice.

But You Also Get Other Benefits

When using local influencers, you want to make sure that they post relatable and transparent content. Don’t encourage influencers to lie about your products, which will lead to disappointed customers and a bad reputation. It could also get you in legal trouble if your influencers misrepresent your product.

You also want them to post relatable content. This helps their audience connect with them. If their content is relatable, the influencer seems like a friend. This makes the audience give their recommendations more weight than they would otherwise.

How to Choose Local Influencers

It is also crucial to know which local influencers to work with. Since you want their posts to be relatable and transparent, look for people who already have those traits in their posts. This will help ensure a natural fit.

Overall, you want your influencer to have shared values. They should also have interests that are relevant to your company somehow.

When it comes time to narrow down your influencers, you want to pay more attention to engagement than their follower count. Remember that the more engaged their audience is, the more likely they will convert. And remember that local influencers won’t necessarily have massive audiences, as their audience will be primarily local.

Don’t Forget to Evaluate the Campaigns

Using local influencers is a cost-effective alternative to choosing influencers with larger audiences. You get the added benefits of improved engagement and a local audience and the other assets of using influencers such as recommendations and more content.